“I decided to go for a little run.” 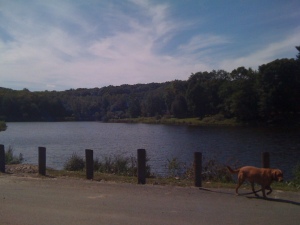 the walk back to the car...

I started my morning with a little yoga and some quality time with the kettlebell.  I also attempted a few pathetic push-ups (maybe 10 tops…I’m working on it) before I decided it was way too nice out not to go for a run.  The sunshine and cool breeze were calling me!  Since I’m still easing back in and trying not to re-aggravate my IT bands, I brought Penny along.  She was ecstatic to say the least.

I figured today would be a good one to do some hills. Why?

Well, there are numerous benefits to doing training on hills:

1) Want to improve your running form– do hills.   It’s hard to run uphill with poor form.  Running uphill forces you to straighten your back, use your arms, and get up on the balls of your feet.  Plus, it improves your turn-over and stride length.  All these benefits help prevent injury!

2) Want to run faster– do hills.  Running against gravity is a terrific form of strength training.  Increased strength and power = faster running.

3) Want better endurance– do hills. Running hills optimizes efficiency, improves anaerobic and aerobic capacity, and increases your body’s tolerance to lactic acid.  All of these enhance your stamina.

4) Want to build your confidence...you guessed it!  Hills are tough physically and psychologically.  Conquer them in training and it will be a huge boost to your running ego.  Not to mention, there’s an added sense of achievement each time you reach the top. 🙂

If those aren’t enough reasons, how about getting a tighter backside?  That’s right! Uphill work is great for the gluteal muscles- which will not only give you a nice shape, but will help with injury prevention too!

All that being said, the hill workout went great.  At least, it was great until poor Penny got injured.

We had maybe been running 45 minutes (up every steep, endless hill we could find), when I noticed Penny kept trying to head for the lake.  I thought she could probably use a break, so I hiked with her down to the water.   Penny loves to swim. Knowing her favorite water game is to fetch, I tossed a small branch for her.  She merrily swam out to retrieve it several times before it was clear that she was getting tired and it was time to head back.  I started back up the hill behind her and immediately saw her back paw was bleeding quite a bit.  She was favoring it a little, but overall didn’t seem too fazed.  I panicked for a moment, realizing we were no where near the car, and she was too heavy for me to carry.  I felt terrible.  I considered rushing her to the vet office, but she is petrified of going there.  With the wound being so dirty, I was sure they wouldn’t be able to do much other than clean it out well and bandage it. With no other idea for what to do, I continued to walk back toward the parking lot with her.  All the while Penny trotted joyfully, completely unbothered by the bloody trail she was leaving in her wake.  I reminded myself that it was only a cut, and the worst that could happen is it would get infected (easily treated with antibiotics).

I figured it would be easier on both of us if I just took care of her myself.   Afterall, I am a surgical PA; I should be able to handle this right?  Once I dropped Penny off at home, I stopped at Rite Aid and got some supplies.  I have to give her credit for being so tolerant.  She is one of the most well-tempered dogs I’ve ever met.  She let me take care of cleaning what turned out to be a deep cut out (and applying a dressing) with only an occasional pathetic whimper in protest.  When it was all over, I think she was quite relieved.  Luckily, she was worn out from the run and has been resting comfortably.  I was incredibly grateful that she hasn’t bothered with the dressing at all.  Hopefully she’ll be good as new in no time.

The one thing I realized in all of this is that I should probably keep some basic first aid supplies in my hydration pack (especially now that I’m running in the woods alone for hours).  I’m going to get some quick clot, medical tape, gauze, and maybe a small knife to carry with me- sort of a makeshift first aid kit.  I’ll probably start carrying an extra snack just in case too.  In the meantime, it looks like I need to find a new, temporary running buddy. 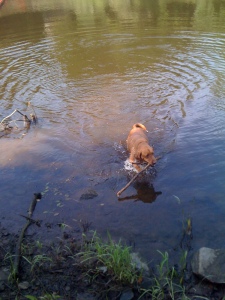 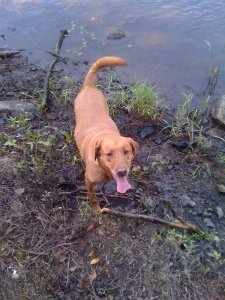 so proud of herself 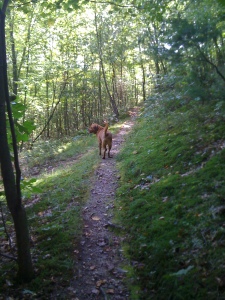 unfazed by her injury 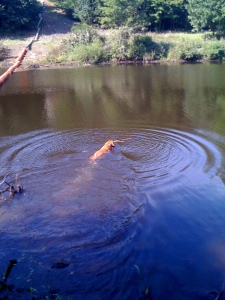 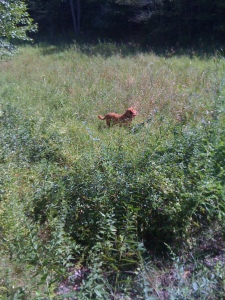 frolicking in the fields 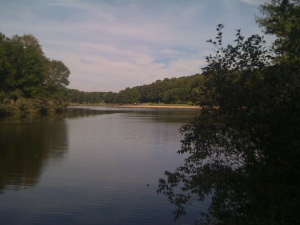 view of the lake