“In running, it doesn’t matter whether you come in first, in the middle of the pack, or last. You can say, ‘I have finished.’ There is a lot of satisfaction in that.”
-Fred Lebow, New York City Marathon co-founder

Yesterday I ran my second “official” half marathon in Colchester.  I have run the distance several times now, but this race was special because it was a first half for a kick ass, amazing friend of mine.  The course was absolutely BRUTAL. It was hills, hills, and more hills.  Steep hills, gradual hills, never-ending hills…  Plus, the wind gusts were up to 50 mph, which is super fun when you’re running up hill into it.  I felt a little guilty for recommending she try it after realizing how tough it was, but she is a boot camper so I knew she could handle it- no matter how tough. 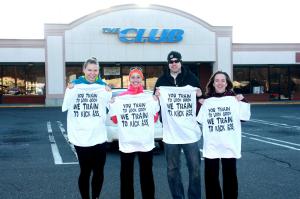 "You train to look good. We train to kick ass."

Our morning started with an uplifting visit from one of our fellow boot campers (Superwoman Kelly) with PRESENTS!  Who doesn’t like surprise presents? Especially when they are awesome “We train to kick ass” t-shirts from your trainer!  I think that definitely helped to get us pumped!  All the support from our boot camp peeps was almost overwhelming.

Despite the less than stellar conditions and brutal hills, we all managed to survive- a HUGE achievement in my book!  I had been feeling pretty crummy the day before and continued to have stomach issues the morning of, but I figured it was just nerves.  However, as the race progressed I realized my stomach pain and nausea were actually getting worse and not better. I literally ran as fast as I could without vomiting.  I had NEVER experienced pain like that on a run before.  I tried to convince myself I was not sick pretty much the entire time, but once the race was over and we got home, I spent a good part of the afternoon curled up in the bathroom or doubled over in pain.  I think it was probably a combination of factors including: GI bug circulating at work, dehydration due to stomach bug and exercise, and running a little harder than I probably should have.

As of this morning I was still having pain anytime I ate, but it seems to finally be resolving. I did still manage to get through two Insanity workouts this morning and then hit the climbing gym this afternoon with Adam and one of his friends.  I thought the climbing might be a little rough after being sick.. and the half, and the two morning workouts… but it actually felt pretty good and turned out to be a lot of fun.  Plus, I figured it would be good pull-up training!

While we were at the climbing gym, Adam accomplished his February boot camp goal of doing a handstand pushup.  I found this particularly impressive since we had already done quite a bit of climbing.  I figured it was worth a try but only managed to get down about an inch.  For the record though, my handstand totally beat his- and I got into it all by myself. 😉  Anyway, it’s definitely something I’ll be adding to my to do list! – along with the pull-ups, a one handed pushup, and jumping on the tall box with the small box on it.  The fact that Adam made it up on his second try and I’ve been diligently slaving at my goal for weeks makes me feel like maybe he didn’t pick something hard enough- that and his friend totally ratted him out that he used to do them “all the time” in the Marine Corps.  jk- I’m totally proud of him.

Overall, it was an awesome weekend.  I spent time with a lot of great people and got a lot of tough working out in too!  Adam and I even got to go out for some Hibachi after the half with some of our friends from boot camp which was a real treat!

Also, Adam’s friend gave me a lot of great tips on building the muscle groups for my pull-up and I am super psyched to try them out.  I am still a little frustrated that I haven’t been able to do one, and, consequently, haven’t met my February goal.  However, I have helped several other people conquer their goals and that is equally rewarding.  I’m sure I will get my chance too, but until then I will keep busting my tail to get it done!

In the meantime, I can celebrate the victories of my boot camp buddies, including my friend Melissa who annihilated her February goal and rocked out the half yesterday in 2:14. (Her lofty time goal was 2:15- not too shabby!)  I finished only a couple minutes ahead of her and Adam (not surprisingly) smoked us both.  Our friend Jamie also ran with us and KILLED IT despite not feeling great while running.  It was such a great experience to race with all of them!!!

I hope everyone had an excellent weekend!!!