(maybe I should have been a wimp…)

When I ran a really hilly, windy half marathon with a stomach bug and got dehydrated… and likely gave myself ischemic colitis?  Yeah, that totally sucked.  (Not the running, the getting sick part…just to clarify) It sucks even more now because yesterday I felt fine.  In fact, I felt great.  I felt so great I did two Insanity workouts and then spent a couple hours at the climbing gym where I was either climbing or belaying pretty much the entire time…

I did drink lots of water, but apparently not enough cause last last I woke up in pain… again.  It wasn’t as intense as Saturday, but it was enough to keep me up all night.  When I dragged myself in to work this morning, they pretty much turned me around and sent me home where I have been drinking fluids, fluids, and more fluids ever since.

They were very kind to offer me some IV fluid before I left, but I told them I could manage to drink on my own.  So, now I’m home “sick”- except I feel more exhausted and frustrated than sick.  I did take a nap, which helped with the sleep deprivation, but I am super annoyed about not being able to work out. 😦  I am also not happy about missing work... but more the working out.  I have been having some sharp, crampy abdominal pain on and off…mostly after eating, so I have been pretty much trying to avoid food and just drink liquids instead.

Initially, I had hoped to use some vacation time at work today to get out in time for boot camp, but instead I will be home all day with no exercise allowed. Total bummer! 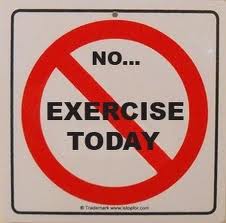 I guess I should have listened better to my body on Saturday, but I honestly didn’t feel that bad.  I’ve been either getting or getting over something all winter, so I didn’t think much of the symptoms.  When I had all that pain while I was running, I really wasn’t sure what it was from.  I thought maybe all the uphill running was making my abs hurt and the nausea is not that unusual for me when I’m pushing hard.  When I finished and got really sick, I figured I was probably dehydrated and may have developed some ischemia.  However, I NEVER would have imagined I’d still be having issues 2 days later.

The only thing I can do now and take it easy and wait it out… and be smarter next time!  In the future I will definitely be doing a better job of hydrating myself before race days (instead of drinking caffeine all day to stay awake at work…).  Also, I think I’ll seriously consider bringing my hydration pack on any future half with only 3 water stations.  Aside from the Tough Mudder, I can’t ever remember being that thirsty on a run!  I would rather carry a little extra weight than run this risk of getting dehydrated again.

The good news is being home sick has given me a chance to catch up on my blogging, and blog reading!  Plus, I know know I’ll be back to kicking butt (my own that is) in no time.  I have a whole list of goals now and I am ready to get at them- body permitting.

I totally need to make one of these!!!