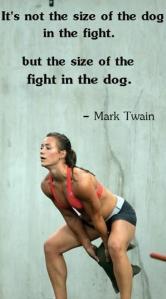 Ever wonder what happens when a group of boot campers go rogue? Twelve scoops of ice cream topped over 2 chocolate lava cakes with m&m’s, gummy worms, and who-knows-what-else turns into a sad empty plate… THAT’S WHAT! 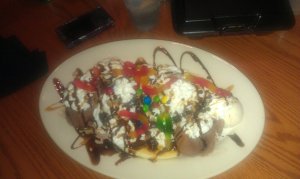 In our defense, it was a special occasion (Kelly’s Birthday/St. Patrick’s Day) AND it took 4 of us to eat it… Alright, one person may have carried the team a little, but she has a six pack and manly biceps so that makes it ok, right?

Despite any slight pings of guilt any of us may have felt, it was a great time! We even got to torture Adam’s best friend about the endless reasons why he needs to join boot camp.  Ultimately, he continues to refuse, so we just told him we would bring a boot camp flash mob to his house. 🙂  He’s so funny thinking won’t wouldn’t actually do it!

Aside from pigging out on St. Patrick’s Day weekend (including yummy S’mores Sunday night!) I have actually been eating very healthy recent (very healthy for me anyway).  The thing that sucks about eating food that is actually digestible- I feel like I have a tape worm again and need to eat every 2 hours or I get light headed.  This is especially fun when you work in a profession where you don’t even get a real lunch break.  The fact that I also have been working out like nobody’s business and getting my butt kicked by month 2 of Insanity probably isn’t helping. 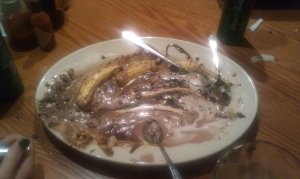 To this...ok there was a banana left, but not much else

That extra 10-15 minutes of intervals has been killing me!- no lie.  (Of course that may be in part from me over-doing it on a regular basis.)  I know it may seem a bit intense to some people that I pull so many doubles and triples. However, the truth is on the days I work it is very difficult for me to get a good workout in; so although I may be getting in 2 or three workouts on my days off, it’s still only (haha “only” I know what you’re thinking!) 7 or 8 (alright, sometimes more) sessions for the week.  Plus, I don’t really count going for a casual run or afternoon at the climbing gym a “workout” – even if it actually is one. 😉 To me, it’s just fun.  Like going to a movie, but without all the junk food.

The highlight of my weekend was surprisingly not the junk food, but rather lifting with Adam and his best friend.  I really like hitting the weights with them, because 1) lifting heaving things makes me feel like a total badass, and 2) Adam’s friend makes it a point to push me really hard.  (Plus, he is like a super man with the weights!  I am always super impressed by the amount he is able to lift.)  I even made it a point to wear my bad ass boot camp gear so I could feel even more like a badass!  (and I thought Adam’s friend would appreciate the badass socks) 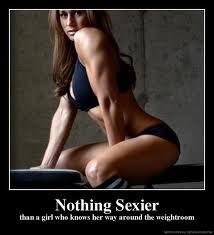 We ended up doing back, shoulders, and abs.  In true awesome form, Adam’s friend was doing rows with more than my body weight!!!! He was also trying to teach me how to do a dragon flag, but my back was shot after the rows and completely uncooperative.  Apparently, it is something near impossible to do on your first try, but I gave it my best effort! Something to add to the goal list for sure!  I did have one great accomplishment for the day, however. I completely SMOKED the boys at back extensions.  Initially, they told me to do them until I got tired, but when I was over 60 in, they decided it was too easy and gave me a weight.  When that still didn’t wear me out, they (picked their jaws off the floor, and then) handed me a 25 lb plate and I knocked out about 25 more.

Adam tried to say it was because I wasn’t bending far enough over, but his friend totally backed me up that I was doing them correctly (secretly, I think he was impressed but his manly pride wouldn’t let him admit it 😉 ).  I think it probably worked in my favor that I’m so short and compact, but I’m also totally sure it had to do with the fact THAT I WORK HARDER THAN BOTH OF THEM PUT TOGETHER- especially Adam who tends to rely on his natural athletic ability (who could fault him, really?).   I get that it probably sucks for him when his athletically challenged girlfriend kicks his butt at something physical, but the reality is HARD WORK BEATS TALENT WHEN TALENT DOESN’T WORK HARD!  I may be tiny, but I have a lot of heart and I’m willing to bust my ass– which is EXACTLY what I do.

In other news, I am STILL working on the pull ups (and chin ups).  I’ve made some progress at lifting with my back but still can’t get my arms to bend.  The important thing, though, is I am closer than I was yesterday!!! I have also been nominated for a few more blog awards- which I need to get on posting pronto!

I hope everyone is having an AWESOME day!!!