sThis past weekend I did the Warrior Dash with some friends from boot camp (including my best buds Kelly and Meghan- love them!!!!).  I didn’t train (or taper) ahead of time because I really just signed up for fun, not any kind of PR.  I was definitely looking forward to some quality times with my girls, and that fact that we would be beasting through mud and obstacles only made it that much better. 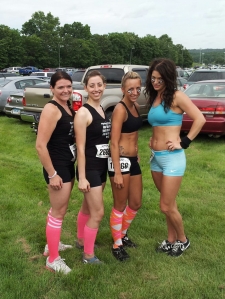 I was initially a little skeptical about how much I would enjoy a 5K now that I’m so used to running 10K or more.  I’m one of those people who tends to run close to the same pace no matter how many miles you put in front of me, and that pace is not particularly fast!  As such, I figured I was going to be slow as heck. That is not exactly what happened…

Instead, I channeled all the aggravation and hurt I’ve been feeling into propulsion.  In short, I  hauled ass… at least I felt like I was. lol  I definitely took off like a shot… only to get slowed considerably by some incredibly sticky mud that kept pulling off my shoes (and everyone else’s). I had a lot of fun with the obstacles because they were easy enough to do without the help of a team.  They even had a little climbing wall!

Because our start time was so late in the day, and it was a long (2 hr) drive, I had not eaten beforehand.  I was STARVING!!!!! However, given that I was not in a position to do anything about it, I kept pushing anyway.  I just wanted to get through as quickly as I could- bonking or not.  Whenever I felt tired, I reminded myself of what I felt like the last 5 K of every other race I’ve done, and how what I was feeling in that moment didn’t even compare.  I knew I could hustle through it, even if my body was rebelling.

In the end, I was surprised to find I had finished ahead of the other girls in the group.  I even came close to finishing ahead of Mike (our trainer)- mostly owing to the fact that he had walked part of it (YES MIKE! You knew it was coming!)  Overall I came in 352nd out of 6877 and 13th out of 1168 in my age group.  Considering I have always been a middle of the pack runner at best, I was both shocked and thrilled.  It made me want to go do one every weekend- especially when I knew I could have run faster!!! I even joked on my Facebook page that I might have even made the top ten in my age group if I hadn’t done 90 min of P90X yoga in the morning and actually ate beforehand. lol

The real rock star of the day, though, was Meghan- who completely destroyed her first obstacle race.  She also managed to look completely fabulous while doing it and got hit on so many times, we all lost track.  In fact, she even got a marriage proposal and hit on by a chick. GO MEGHAN AND YOUR HOT, BAD ASS SELF. I can’t blame them; the girl has it going on!

Once the race was over, we ended up tail gating in the parking lot with some people who were parked close by.  Meghan, of course, immediately started up conversation with them and within minutes was taking part in their photo sessions.  We shared our beer, they gave us doughnuts, it was all good. They were definitely a fun group, and we ended up staying until it was late and getting dark.  On their way out of the park, the youngest of their team asked “which one of you ladies is going to give me your number?” and we all laughed.  He clearly looked like he was right out of high school. It turned out he was only 19. After establishing that we would be more appropriate as babysitters than dates for him, they were again on their way, and we headed home.

It was definitely a great day and a great time!  I was so happy for Meghan and grateful to spend time with both her and Kelly.  Sometimes I think we need a babysitter (or chaperone) when we all get together. 😉  It’s definitely always an adventure!!!! 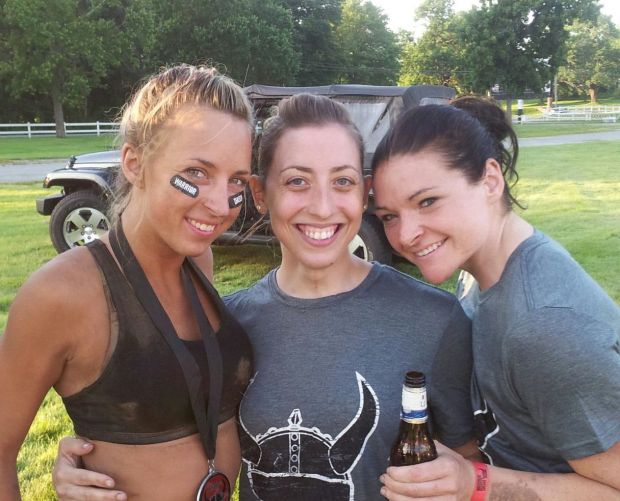 With great friends and family, really what else do you need in life? (other than exercise…. we all know I could never survive without exercise 😉 )