“Happiness is pushing your limits and watching them back down.”
-New Balance 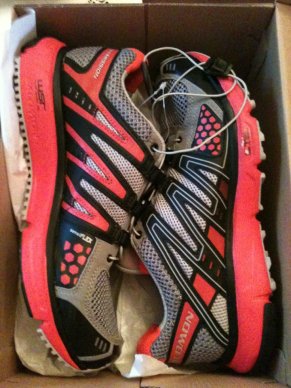 I am not so in love with you at the moment. You lured me in with your super comfiness in the store and promises of fewer blisters (I believe the direct quote was “you won’t even feel the rocks”); however our maiden voyage left much to be desired.  We have a LONG way to go before you will even come close to holding the esteem of my vibrams…

SOOOO I took the new trail shoes out for a test run.  In retrospect I may have had some delusions of grandeur….  They were SOOOOO COMFY in the store, but that didn’t exactly translate on the trails.  Of course, I’m sure it didn’t help that I wore my cushioned running socks (which did not work well with the shoes because the fit was so snug).

It probably also didn’t help that my legs were so fatigued they felt like lead… possibly related to all the training I’ve done in the past few days and a regimen that morning consisting of P90X Biceps, Back, and Ab Ripper X followed by a 40 min session of running laps and swimming in my mom’s pool (even pulling my sister around at times).  Of course, I didn’t feel fatigued until I tried to get up the first hill (which was steep, rocky, and monstrous for anyone wondering).  I was trying REALLY hard to get my body to cooperate but every time I willed it to move faster, my legs screamed “NO!!!!” and refused to cooperate. 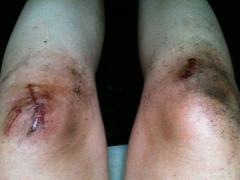 level (not exactly flat, but at least not vertical!) ground, I tripped and completely face planted.  It turned out my legs really were fatigued and I was not simply being a whiny wuss. Aside from some skinned knees, I appeared to be in one piece; so a bounced up and headed back down the trail.

I had to stop numerous times to adjust my laces because they kept loosening up why I was running.  Speed laces are a new concept to me, and I suppose it will take some time to adjust.  The problem is, every time the laces would get loose, my feet would slide around in the shoes leading to some serious blisters early in the run.  The arch of my right foot was burning BADLY, but Ikept telling myself it was “just pain.”  I managed over 5 miles in total with a mix of hiking and running. In retrospect, 5 miles was probably a little much for breaking in new shoes, however I was feeling the time crunch with Pike’s Peak just around the corner. 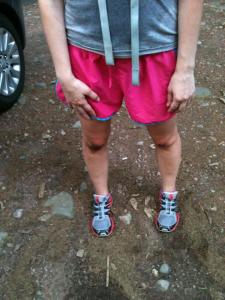 Overall, the route was definitely significantly more technical than the trails closer to home that I usually run on (lots of steep rocks and loose footing…. AND RIDICULOUSLY STEEP,  ENDLESS HILLS!!!)- just the type of training grounds that will help me get prepped for the Ultra Beast!

Prior to running in the new trail shoes, I hadn’t realized just how accustomed I had become to the vibrams.  It was like I had to learn to run all over again!  I was constantly twisting and rolling my ankles because I wasn’t used to having a sole wider than my foot.  I have been assured that they will get significantly more comfortable as I get used to them.  I guess I shouldn’t find that surprising given what torture it was to learn to run in the vibrams!!!  Once I get them broken in I will probably alternate between the two depending on where I’m running, just so I don’t loose the benefits of “barefoot running” (plus they’re so comfy now… aside from all the rocks at Sleeping Giant anyway)

Hopefully the shoe situation will be under control by Pike’s Peak.  🙂  For now, it’s blister treatment and cross training for me!