“First you feel like you’re about to die. Then you feel reborn.”

As part of my preparation for the Pikes Peak Ascent, Adam (yes, Adam and I did the Ascent together along with his roommate) and I decided to take on the Manitou Incline trail.  The trail boasts 2,700 ft in elevation gain ( starting at 6530 ft and at ending 8550 ft) over it’s one mile span… in other words it’s one steep B!t@H of a climb!  It’s a bit of an intimidating sight, even from a distance.  To say I was nervous would be a gross understatement.  All I could think about was the altitude sickness I had during the Norcal Tough Mudder, and that wasn’t even that high!

When we arrived at the trail head- complete with no trespassing sign (yup! that’s right, it’s illegal… but still one of the most popular trails) the route only looked more fightening.  Standing at the bottom, the trail extends straight up with no end in sight… literally.  It’s hard to believe it’s only less than a mile long when you can’t even see the finish at the start!

Once we started the climb, it became quickly apparent why it’s still illegal, namely it’s anything but safe!  The Cog Railway that used to run there was shut down in 1990 due to damage from frequent rockslides, and it doesn’t appear much has changed.  The old railway ties are still there, but at many points they are heaved in odd directions with gaping holes in between- making it pretty clear why traffic only moves in the upward direction. 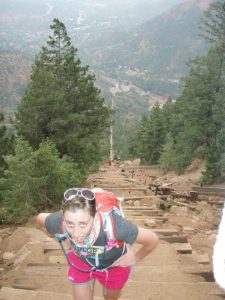 “Am I supposed to feel like I’m about to die?”

The trail started with a moderate incline, but before we even hit the halfway mark, it turned nearly vertical requiring both hands and feet to climb it “safely”- no small task when your lungs are already screaming for air!  To complete the torture, it started to rain.  I was only slightly comforted by the misery on the faces of the people around us, and let me tell you- it was crowded in spite of the rain!  Even the people who passed us appeared to be heaving for their next breath.  I didn’t spot a single person running or even jogging.  Instead, it looked like a slow death march with several people not even moving at any given time.

At first I tried not to stop at all, but I was so dizzy from the attitude I was becoming terribly uncoordinated.  I started resting whenever I felt palpitations or my head started spinning, and that seemed to help.  I was SO MISERABLE!!! It is truly uncomfortable to feel like you can’t breath and then not have enough oxygen in your system.  It makes you dizzy, nauseated, and extremely uncoordinated… not to mention anxious!  Every second at spent at altitude gave me a real appreciation of what asthmatics everywhere struggle with on a daily basis.  I wanted so badly for it to be over and had to work EXTREMELY hard to keep my nerves in check.  At one point I asked Adam “Am I supposed to feel like I’m about to die?” (I think my chest felt like it was about to literally explode at that moment..)  He said “Yea, pretty much”;  and that was all I needed to hear.  I kept telling myself “this is normal” and the only way to make it stop was to reach the top.  Quitting was NOT AN OPTION.

When we reached the halfway point (also called the “bailout point” where hikers can catch the Bar trail and head back down), Adam gave me the option of heading back.  I told him I refused to quit and kept pushing onward and upward.

“who says coming down is the hardest part?”

Then, eventually, we FINALLY reached the top of the “false summit”, and I could see the top.  I was so elated!!!  It seemed like it had taken FOREVER, and for a while I had thought it would never end!  Now I was just feet away from the summit!  If I had been able to sprint the last of it I would have, but my lungs were so starved for oxygen I had to pause another 2 or 3 times to keep my heart rate in check.  I made it though; and I think Adam was surprised (he clearly doesn’t know me very well!).  He said he thought I might turn around because of the rain… I think he just underestimated how unwilling I am to give up!

Conquering that trail made me equally confident and terrified of taking on the Ascent.  I was excited that I was able to push through the MOST UNCOMFORTABLE “RUNNING” EXPERIENCE OF MY LIFE; but also scared to death that the Ascent would be even worse.

Regardless, I still basked in the glory of the moment.  It was the first physical accomplishment I had achieved in a long while.  Accomplishing it after all the injuries and setbacks made it that much sweeter.  My legs didn’t even feel tired at the top (probably because I was too busy struggling for air), and that made me feel like all my Ultra BEast Training might actually be paying off.  The icing on the cake was without a doubt the run back down!  I had SO MUCH FUN bouncing from side to side, from rock to rock, and back and forth across the trail in my awesome new Inov8’s!!!

I felt like I was flying… at least until Adam passed me and left me in the dust.  Maybe I wasn’t going so fast afterall… lol  I did still accomplish something pretty awesome though.  Not too shabby for a sea level girl. 🙂 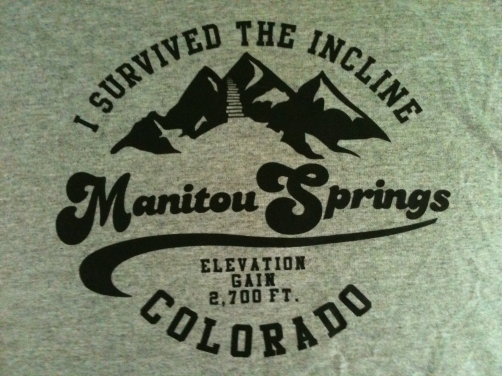