There are some experiences in your life that can be described as pivotal: defining moments.  Those moments when you step (or plunge) outside your comfort zone and chose to define yourself on your own terms.  Today I feel like I took a huge leap, and delved full on into the world of cycling.

To be honest, from the moment I arrived at the Two Ferries Ride I felt like an outsider… an imposter even.  Here I was surrounded by all these people who live for cycling, while I am trepidatious at best, and utterly terrified at worst.  Adam had assured me that cycling community would be as friendly as the running community, but I believe he stretched the truth slightly.  The people there were not rude or mean, but they certainly were not as friendly or supportive as the average runner.  Rather, they tended to stick in groups and only socialize with the 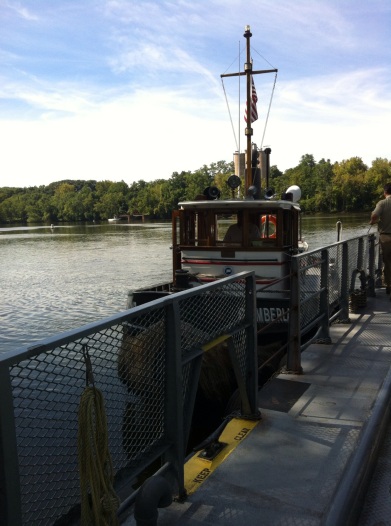 people they already knew.  It was like a great big clique and I wasn’t part of it.  Maybe if I had been a part of the shop’s riding group, it would have been different.  Instead, I was there alone with next to no experience.  I almost cried before we even started.

When we did start, I probably road faster than I ever have in my life.  My fear of being left behind drastically outweighed my fear of moving quickly.  I managed to keep up with the back end of the pack up until the 10 mile rest stop, and then I was left in the dust.  I actually was able to follow the markers without trouble and remain calm despite being alone and completely unfamiliar with the area right up until I missed a turn at mile 19.  I had been climbing a hill for quite some time when I realized I had not seen a marker in a while.  I also noticed that I wasn’t seeing any at the intersections and that I must have gone of course.  If that wasn’t enough of a hint, the cyclists flying down the hill from the opposite direction (with plenty of markers on their side of the road) hammered home the point.  I made it all the way to the top of that hill before I started bawling.

I was faced with two options, I could either back track and find the turn I missed, or follow the markers for the route on the other side of the road.  The problem with option 1 was that I already had missed the marker for the turn once, and now it would be on the opposite side of the road and harder to see.  The problem with option 2: I didn’t know whether the markers I found were for the 66 or 100 mile course.  Worst case scenario I figured I could manage the 66 miles, but I certainly did not want to get stuck on the 100 mile route.  Ultimately, I decided it was better to take a longer route I was sure of than gamble on finding the marker I missed. Since all the rides ended up at the Ferry at some point (or even multiple points) in the ride, I figured that even if I ended up on the longest route I could still get back on track once I found the Ferry.

Luckily, my plan worked out.  The markers led me back the direction I was supposed to be traveling, and I was able to pick up the correct path again once I was off the Ferry.  By the end of it I had been on the bike over 3 hours AND only fell once… though I did have several near misses.  (I suppose if you a clumsy person in general that it tends to carry over in cycling as well)  Many… ok most… of the things I was worried about happening actually did: I fell down, I was clumsy, I was slow, I got lost, and I got left by myself. However, I still survived and finished relatively unscathed.

The people who work in the bike shop were actually impressed that I was able to climb to the top of that hill.  They said I get extra credit in doing so and remarked that “a lot” of people had missed the turn and gotten lost.

I suppose that made me feel slightly better.  The one thing that I did feel good about was that fact that everyone else was complaining about the hills while I hadn’t struggled on them.  In fact, they were easier than I expected and TREMENDOUSLY easier than the route I take to the gym.  I figured if these experienced cyclists were complaining about the hills, and I didn’t mind them then maybe I’m not such a complete disaster on my bike after all.

I’m not sure that I will ever love cycling (or anything) as much as I love running, but I am hoping that the more time I spend on my bike the more comfortable I will get both with riding and the cycling community.  I draw hope from the fact that I don’t know anymore who just “likes” cycling.  People tend to either be completely passionate about it, or they don’t ride at all.  This leads me to believe that with enough e practice I too can become a cycle enthusiast and actually ride with a sense of enjoyment rather than a fear of death.  There are fleeting moments now when I forget about the peril and actually enjoy the freedom of the road… primarily areas free of winding turns and intersections.

If nothing else, it is my absolute fear of riding that keeps me coming back to it.  I am determined to conquer my fear and I am willing to accept that it may be a long and arduous process.  This ride was a major step to doing just that,