“Slow down you’re doing fine
You can’t be everything you want to be
Before your time.”
–Billy Joel 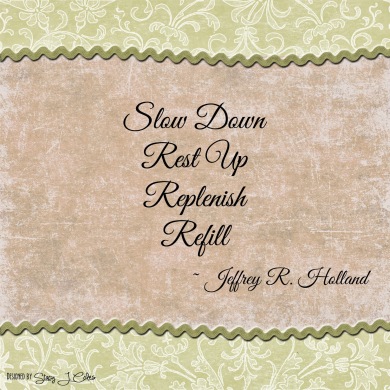 Last night I worked the second shift.  I woke up after only 4 hours of sleep and headed to spin class despite still be exhausted and having a sore throat.  The thing is, this morning was Motown Morning and l LOVE the Thursday morning instructor.  I had already planned my whole day around this class, and I didn’t want to miss it.  The class was GREAT!  It was a Motown-Music-Spin-Sing-A-Long!  The actual singing part was a little difficult given the workout was rolling hills, and we were all out of breath.  Our instructor, on the other hand, who had given up her bike at the front to make room for another member in class, spent the entire class dancing, singing, and shouting out workout.

songs so everything is timed perfectly.  She also clearly loves life.  I think that is why her class is so popular.  If you arrive only 10 minute early (YES early, not late…At 5:20 in the morning mind you!), you will be saddened to find no bikes available.  That is because her class is worth dragging yourself out of bed at 4 in the morning…in the dark…in the cold.

That is why I didn’t want to miss it.  Sure, going on 4 hours of sleep and no breakfast (because I didn’t feel well enough to eat it) were probably not a great idea.  I certainly wouldn’t recommend trying either.  However, class was A LOT of fun, and I survived without a problem.  I did make it a point not to push myself as hard as I might have otherwise.  Regardless, though, by the time I got home I felt like crap again…. which was a problem because I had to meet with the trainer at 9am.

I thought about canceling, but since today was supposed to be upper body I figured I could just eat and muddle through it.  Unfortunately for me, it turned out to be core today… which sucked royally!  It was my own fault for mentioning at our last session that I was having low back pain and thought my core probably needed more work.  Since we did tons of plank work in that workout I really didn’t expect core again this week.  I was WRONG.  The good news is the hubs came along too, so I wasn’t suffering alone.  Plus, he was struggling even more than I was.  That made me feel slightly better, but it was still frustrating.

I had to take a minute and remind myself that I already did almost 22 miles of hills at spin already this morning… ON TOP OF all the running, spinning, and lifting (including core work) that I’ve already done this week.  Of course my legs (along with everything else!) felt like lead!  Of course I was struggling!  I had punished my body all week, and now I was expecting peak performance on 4 hours of sleep.  Yeah, it wasn’t happening.  I did finish the workout, but I had to take A LOT of breaks.  I wasn’t able to do any of the exercises for a full minute without pauses.  My quads were fried from spin.  My shoulders were still done from power cleans and core 2 days ago, and my entire body was in rebellion… so I went home and took a nap.  No run today.  In fact, I also skipped out on my swim this morning.

Instead of a rest day, I’m going to consider today a “slow day”: as in slow down and take a breath.  Sometimes I get so caught up in pursuing goals and becoming the best and fittest version of myself that I forget it’s okay not to go full tilt every second of every day.  While it is great to have aspirations, they shouldn’t consume my whole life.  Part of being the best version of me is finding balance.  Today I dragged myself out of bed to workout first thing this morning (the morning part is actually debatable).  The rest of the day I’ll spend chillaxin… or at least, I’ll do my best at it.  😉