“Today I will run for the pure, absolute joy.”
-Lopen Lomong

This morning I got up to some pretty chilly weather. In fact, when I checked my Authentic Weather Ap, it looked something like this:

Now I know it’s December, and there are plenty of FREEZING days in store between now and January; buuuuttttt I live in New England. The weather here is unpredictable. Sure today it’s in the 30’s, but tomorrow it might be in the 60’s.  I’m not taking any chances, which means taking advantage of the really cold weather when I can. None of that unseasonably warm stuff for me. I have a sub-freezing ultra to train for!

Besides, I just got a sweet deal on a Pearl Izumi Elite Barrier jacket, so I obviously needed to test it out. In addition to being wind and water resistant, it was supposed to also be thermal. Given the paper thin fabric, I had some doubts. As it turns it, it really was warm. No false advertising there. Good on you, Pearl Izumi and your freakishly warm paper-thin jacket.

Aaaaannnnyway I picked the Larkin State Bridle Trail because it’s a nice long, flat out and back that is about as close as I’m going to get to the Winter Beast of Burden terrain… minus the multiple feet of snow. In fact, despite the freezing temps and recent snow fall, there actually wasn’t any snow this morning. We’ve had some heavy rain over the past two days that likely washed away any that was left from our most recent storm.

As usual, the scenery was breathtaking. I spent the entire run out soaking in the views without stopping (and soaking in general thanks to some flooding…). Then I gave myself the liberty of snapping a few photos on the way back. Unfortunately, I couldn’t run the entire trail because at just over eight miles in, it was completely underwater. Having already run through some ankle deep freezing water prior to that point, I really wasn’t excited about the prospect of wading waist deep. I know, I’m a wimp.

My goal going into the run was to try to get in an easy ten. However after about four miles (when my legs finally warmed up), I was feeling surprisingly good. That’s when I decided it might be fun to take on the entire out and back and get in a 20 miler (yes, I just used fun and 20 miler in the same sentence). After all, I’m never one to waste a good runner’s high!

Doesn’t get better than this, right?

Not being able to run the full route meant I would have to do some extra miles at the end. I took this at a fantastic opportunity to do some mileage at my favorite place on earth… which conveniently happened to be just across the street (Yea! Lucky me!). I think I would have enjoyed the scenery there more if I were not hitting the 18-20 mile wall; however, it was still pretty awesome.

With the plan to go extra long, I thought today run would be perfect for my Emma’s Little Wonder Virtual Fun Run. Emma’s Virtual Fun Run is a fundraiser started by an awesome young lady runner as her Bat Mitzvah project. According to the website for her run “Little Wonder is a non-profit organization that enriches the lives of patients going through cancer treatment and gives them and their families a night out by providing them tickets to local concerts, family entertainment, live theater, and sporting events free of charge. The funds we raise will help spread the word about Little Wonder and increase awareness for patients, hospitals, and vendors.”

Like a said, she’s a pretty awesome young lady to set up a fundraiser for such a worthy cause, but then we all know that runners a generous, giving breed. As someone who has been touched by cancer both in my personal life and as a healthcare provider, I was honored to take part in supporting her project.

Furthermore, I would like to encourage all of you to participate as well. You have until December 31st to register. What better way to motivate yourself to get out and run now that the weather has turned cold (at least in my neck of the woods)? Emma recommends a 5K walk or run, but is encouraging everyone to put forth their best effort and do what they can. She is even recognizing winners in the following categories:

So there you have it folks! The gauntlet has been issued! It’s only $18 to register and the money goes toward a great cause. Plus, you have to opportunity to win one of these great titles (because if you aren’t motivated by charity, you might be tempted by the chance for glory). For those of you considering going for the longest distance, you’ll have to top my 20 miler from today… which was epic by the way (except for miles 18-20 which sucked miserably). 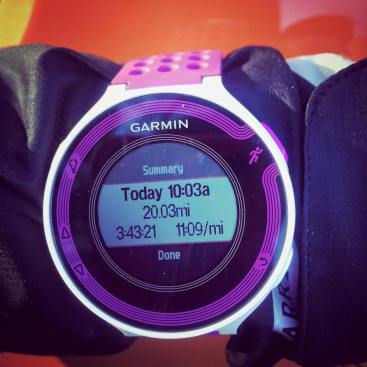 If you do decide to sign up, be sure to tag your running related selfies and photos with the hashtag #littlewonderfunrun; and while you’re at it consider giving Emma a shout out for what a terrific thing she’s doing.