“My greatest strength in life is that I am constantly underestimated.

I am so much more than you perceive.”

Hello fellow bloggers, fitness fanatics, and people who clicked on this page by accident.

This morning I woke up still sick, but did my next Insanity workout anyway.  I am sure there are a lot of people who think that’s a really bad idea, but I am going to choose to tune them out. 😉  The truth is, that most people will  measure what you are capable of by their own perceived limitations.  It’s hard for other people to view the  amount of training I do as healthy, because they can’t see it as possible for themselves.

For example, when I told my family I was going to run a marathon (which I only decided after running a full half in training) the response consisted of how concerned they were that I was training too hard and would injure myself.  I also heard from numerous other individuals that it isn’t healthy to run anything more than a half marathon and people who do are crazy to put their bodies through that kind of stress.  It’s like will live in a world filled with walls and barriers; and the fact that I’d rather go over them than live within them seems to make people nervous.  The thing is, I finished that marathon and didn’t injury myself.  In fact, it got me in great shape.  I did suffer from a few days of the flu afterward, but it certainly didn’t kill or maim me the way people predicted it would.

I have been told on numerous occasions that the limits I push myself to are insane.  People hear about the boot camp workouts and assume it’s unhealthy just because of the intensity and number of reps.  (I think it’s also hard for them to picture me doing some of the workouts because I’m petite and not visibly ripped)  Likewise, they can’t comprehend how going for a 3 or 4 hour run could not be damaging to my joints. 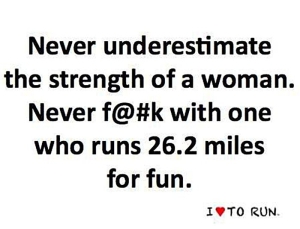 What they’re missing is just how good really pushing hard feels.  A 3 or 4 hour run is as refreshing to me as sleep is for other people.  An intense boot camp session is like instant prozac for me.  Pushing my body to the limit is a constant reminder of how strong I am inside.  It’s an exercise in mind over matter.  Distance running is a mental sport.  It’s you pushing your body to keep going long after it wants to quit.  Boot camp and Insanity are no different- which is probably why I enjoy them as much as running.

I admit that there have been times when I have probably pushed my body a little harder than a should have (like back-to-back boot camp sessions less than a week before the marathon).  However, I have not had an injury in the past several years– DESPITE training harder and more frequently than I ever had in the past.  My point- if there is something wearing me to the point of being run down, it’s in spite of the exercise NOT because of it.  That is why sick or not, I was going to get in my workout this morning.  It’s a matter of starting my day on the right foot.  Plus, if I really was feeling awful, I would have stopped; and I have the whole rest of the day to take it easy… at least until boot camp.

If there is some far reaching goal that you have wanted to work toward but have put off out of fear (or fear of criticism)- JUST GO FOR IT.  Victories are won in inches, not miles.  Start today and make some progress.  When I first saw the ads for Insanity, I thought I would never make it through the workouts.

They had fitness instructors complaining it was too hard to finish.  Then I signed up for boot camp, and just a few months later I’m finding the program EASIER than what I’m already doing.  I didn’t just wake up one day and find I was in great shape (measured more by improvement in strength and endurance than appearance).  I built momentum over time.  I started with a 10K and worked up to a marathon.  I was terrified to do my first Tough Mudder, and then realized afterward that it was not nearly as hard as people made it out to be.  YES, it was all very difficult, but it wasn’t impossible.  Don’t let let anyone- including yourself- talk you out of what you really desire in life.  It can be yours if you’re willing to work for it.

I have spent a lot of my life being underestimated by other people.  I’m small, soft spoken, and (usually) polite.  These are all qualities people associate with weakness- but I am not a weak person.  I may be quiet, but I am also resolute.  I survived an abusive relationship and rebuilt my life.  I have endured a Tough Mudder, marathon, and boot camp.  People frequently ask me what I’m training so hard for, expecting me to list a bunch of races.  However, what I’m training for is life. Exercise and running has made me much more tough mentally than physically.  I am prepared to take on whatever life has to throw at me because I have pushed through every self imposed limitation.

Aside from my drive and motivation to meet my goals, there is nothing different or exceptional about me.  Anyone can do it.  Give up the excuses, crutches, and lingering doubts and just go do it.