“I eat miles for breakfast, lunch, and dinner.”  That was my race mantra for the 7 hours and 30ish minutes it took me to complete the Traprock Ultra 50K yesterday.  That is a full 1.5 hours faster than my last ultra finish at Bimbler’s Bluff by the way… just in case you were curious. 😉  While I would like to say the faster time was related to my veteran status as an ultra runner (with one whole 50K under my belt…), the truth is it is much more likely related to the fact that this run was shorter (um, yes they were both 50K but this one was actually 50K… as opposed to the 50K-ish course at Bimbler’s Bluff which was closer to 34 miles… if you didn’t get lost, which I did… repeatedly) and really well marked.

One thing it was not was EASIER.  There were two ridiculously steep climbs within the first couple miles, including one right at the start.  Since the course consisted of 3 loops, we had to do both 3 times!!!  … And thats not even counting having to run the first one (which was by far the worst) in reverse 3 times as well!  So the people who designed Traprock were sadists as well, but then what trail runners and trail race organizers aren’t?  I mean honestly, when have you ever done a trail race that wasn’t filled with ridiculous hills? Or finished a race thinking “gosh that course was easier than I expected?”…. Never? Yeah, me either.  Of course, the hills on this course were steep and technical even by trail running standards.

The good news is, after the quad-busting climbs in the few first miles, there was a nice descent (not so nice going in reverse) followed by a very friendly and supportive aid station and the Lollipop section of the course.  This was the first out and back and it was super fun to cheer on all the runners who were already on their way back.  I think this was my favorite section because it was dirt (minimal rocks!) and consisted of a gradual uphill which became a fast, easy down on the way back.  From there it was another 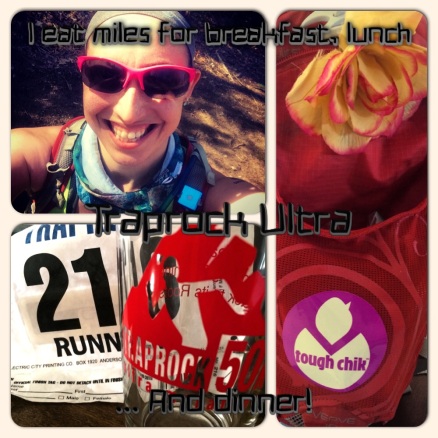 cheer section and back up (literally up… sadists I tell you) into the woods on a lengthy stretch of up and down.  This felt like the longest section of the course to me.   I think partly because after picking up speed in the lollipop section, the steep parts of the hills made me feel like I was grinding to a stop.

After several fake outs (as in “nope, not leveling out yet”), there was yet another aid station at the top of the ridge.  BTW I will say there were some spectacular views along the way, and a nice breeze at the top.  The volunteers at this aid station were also AWESOME.

I just can’t say enough about how wonderful each station was!  They cheered, they played music, they asked how I was feeling and what I needed.  They even filled my hydration pack for me so I didn’t have to take it off.  It was definite pick me up each time I saw them.  This last aid station was roughly 3 miles from the finish and led to a (longer than I would have liked) paved section consisting of a gradual up and down.  The thing I hated about this section (aside from my obvious dislike for running on pavement) was that there was not much shade, and I felt like the sun was roasting me.  By the time it finished I was happy to get back on the trail, even if it meant repeating that merciless hill from the start.  Thankfully, it was slightly less awful in reverse.  Plus, it was a another loop part of the course so I got to cheer for all the runners coming out on there second loop.

Finishing the first loop meant running through the finish and then turning around and heading back up the way we came (yes, up the evil hill again).  It was slightly cruel, but not as emotionally damaging as getting lost and backtracking through the entire Bimbler’s Bluff course.  Unfortunately, during my second loop I started to feel sick.  Anytime I tried to eat anything resembling solid food, it just didn’t agree with me.  I had stomach cramps and a headache, and I was worried I might have to drop out.  It was much warmer than it has been recently, so I was not acclimated to running in the heat.  I tried to increase my fluid intake and see if that helped.  Luckily I had added a protein mixture to my water and was able to keep down the cliff bloks I brought.  It was frustrating because my legs and joints felt good.  I decided just to slow down and not push myself.  After all, it was a gorgeous day and beautiful course.  I 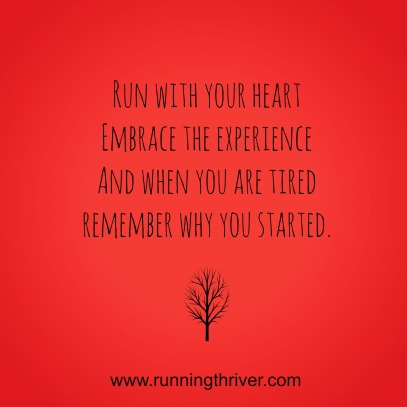 am a trail runner first and foremost.  There is truly nothing that makes me feel happier or more at peace than being on the trails.

My main goal for this race was to finish.  The time cut off was 9 hrs, which is just about what it took to run my last 50K.  I figured I should be able to make that as long as I didn’t get lost.  My secondary goal was to finish in 8 hrs.  Given that I was running over 30 miles, I thought shaving a full hour off my previous time was a reasonable aim.  When I finished my first loop in just over 2 hours (well behind most of the field btw… Ultra Runners are beasts!  And possibly part mountain goat…) I knew I had the time to slow down, and give my body a chance to recover.

My plan worked, and by the start of loop 3 I was feeling great.  I still did not push hard for fear of causing more GI distress; so instead I socialized with the runners nearby and walked the hills. YES! I walked.  I walked any reasonable looking hill.  I am no dummy.  I ran almost the entire Bimbler’s Bluff 50K, and the only thing I accomplished by doing so was burning out my legs on the hills.  This time I had nothing to prove, and I wasn’t about to mess with the heat.  Guess what?  I went faster!  I figured it was better to walk and run than crawl… which is what I would have been doing had I not walked some of those inclines!  It was so much more enjoyable too!  Because my legs weren’t super fatigued, I was able to actually run the flats and downhills, which is so much more fun than poking along at injured pace.

My whole goal for loop 3 was really just to enjoy it, and honestly I did.  Once I got through the hills on that first section I was so pumped to have “the worst” of it behind me.  The aid station volunteers commented on what a big smile I was wearing as I came into view.  I hollered back “The hard part is over! Just the fun stuff left now!” and I truly meant it.  I sailed through the entire lollipop section as if my legs weren’t tired at all (ok, well my version of sailed).  In fact, I felt strong right up until I ran out of cliff bloks.  Then I, again, got into trouble with the cramping.  This was unfortunate because I was heading into the sun-scorching paved section again.  The last 5K was the longest 5K I have ever run in my life.  Most likely because I was barely moving in spite of my best efforts.  I had given everything I had and left it on the course.  There was simply nothing left in me.  That is until I had the finish within my sight.  Then I came down that hill and hurled myself at it as fast as my legs would carry me!

Even being one of the last finishers, there were still plenty of people cheering at the finish.  I was just happy that I had finished before they shut the course down!

I am no expert in Ultra running by any means, but I would definitely recommend this course to any one considering running one.  Normally I am not a fan of any kind of repeats in a race.  However, in this case, it was one of my favorite parts.

First, the fact that the course was a loop meant it was well marked with frequent aid stations (ie. cheer sections).  It also meant by the second and third loop that I knew where I was going, which made it easier to watch my footing (and not face plant).  Furthermore, it was helpful in terms running more efficiently due to knowing where to push hard and where to coast.  Finally, it was a great way to interact with the other runners!  Ultra running can be such a lonely sport when you sign up by yourself.  It’s nice to see a friendly face every once in a while when you spend hours of your day running in the woods.

While I loved my experience at Bimbler’s Bluff, I cannot say I enjoyed the course as much as I did in this ultra.  I had put so much pressure on myself last time to run well and finish.  This time around I really wanted to just embrace the experience.  That is exactly what I did.  Sure plenty of (ok most) people may finished ahead of me, but I doubt any of them enjoyed the experience as much as I did.  For me, trail running is pure bliss.  Even when I’m tired and it hurts, I still love it.  That being said, Traprock has earned a special place in my heart.