“Success is not the result of spontaneous combustion. You must set yourself on fire.”
-Reggie Leach

Borrowed from Marathon Sweetheart. Love her blog! Also love this pic (because this is what I fantasize I look like when I'm lifting)

Not to indulge too much in the drama (it’s not my style… no pity parties here peeps), but I have pretty much had a week from hell (not that couldn’t have been worse, but it was pretty bad).  I got totally run into the ground all week at work so I was REALLY looking forward to a RELAXING four day weekend.  Well, it didn’t exactly work out that way- as they say “people make plans and God laughs).

If you have been reading my blog for a while, you may have caught on by now that my mom is one of (if not THE) most important people in my life.  She understands me better than anyone on the planet and is probably the most kind, caring, selfless, and compassionate person on this planet.  She spends her entire life taking care of everyone around her- which is no small task with my dad being 100% disabled and my grandmother completely needy (and mean and spiteful…you get the idea- just not a nice person). 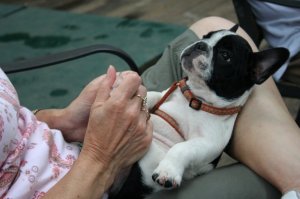 Go ahead and try not to fall in love with that face!

A couple years ago my siblings and I got my mom a french bulldog for her birthday to help her cope with empty nest syndrome.  She had totally fallen in love with my bulldog Lucy (the skateboarding one who she used to kidnap on a regular basis while I was at work) and wanted one of her own, just smaller.  We new a frenchie would be perfect for her, and the puppy she got could not have been a better match.

In fact, my mother and her little Maggie bonded so closely that even the vet commented on how in tune Mags was to any change in my mom’s mood.  We even got my her a second frenchie the following year because my she was concerned that Maggie was too attached to her, but then only ended up completely spoiling both of them.  Those dogs are her life now that all of us kids have lives of our own, and they are with her almost 24/7.  She literally plans her life around them.

So when I talked to my mom Thursday night and she said something was wrong with Mag Pie, I went straight to her house after work.  Poor Maggie had lost use of her back legs and was clearly incredibly stressed and tense.  My mom had rushed her to the vet and they started her on steroids thinking Maggie had gotten stressed because my mother was at her wits end dealing with my grandmother (who just broke her wrist and demanded my mother shuttle her to every doctor appointment and do EVERYTHING for her).  She had a similar previous episode the last time my mom was stressed out of her mind that had resolved on its own, so they were hoping this would get better too.

It didn’t.  I called my mom the next morning and she was hysterical.  Initially I thought Maggie had died, but then she was able to blurt out that Mags still wasn’t walking.  I immediately rolled out of bed and dragged myself over to her house.  We brought Maggie to the vet and they sent us right the the emergency facility in a neighboring town to get an MRI.  Poor Mag Pie had an MRI showing two herniated discs in her back and was rushed to emergency surgery.  My mother was completely beside herself, and the staff practically had to wrestle little Maggie out of her arms.  Luckily my sister was able to front the money for the surgery (it took my mom and I three different credit cards just to cover the deposit).  The good news is that Maggie pulled through the surgery like a champ, is already taking some steps on her own, and should be coming home tomorrow.  My mom has already gone out and bought her an orthopedic bed and new food dishes so she doesn’t have to jump or bed.

With all that going on, I having been working out like a nut to try unwind.  Wednesday night we had 1000 reps of abs plus sprints outside- in the goose poop. It was definitely hardcore with lots of profanity circulating in the ranks, but also super fun.  Saturday and Sunday I did some lifting with Adam and his friend G-dawg (no that’s not really his name. 😉 ) The first day we did chest, biceps, and abs. It was the first time I had benched since high school, so even though I wasn’t going super heavy I still feel like I did a respectable job.  I will definitely push it harder next time though!  We also did dragon flags again- I’m still not there yet, but definitely getting closer!

After all that benching, the following morning my shoulders were FRIED.  This became even more apparent when I tried to do Insanity almost fell on my face throughout the SEVERAL HUNDRED pushups scattered throughout the workout.  I told G-dawg that if Shaun T asked for one more pushup I would have thrown something at the TV (or kicked something, since my arms weren’t working AT ALL).

Sunday we did back and triceps which was not as bad as I expected, especially considering how fried my upper body was.  I was excited to get a few new PRs on dead lift (135 lbs, previous 95 lbs), seated row (80, previous 60 lbs), and triceps pull downs (60, previous 45 lbs).  I am even more excited to see what I can do when I’m not already fried (and exhausted from stress and sleep deprivation). 😉 This morning I started week 8 of Insanity.  It was torture, but at least there weren’t hundreds of pushups.  Of course, I still have boot camp tonight so we’ll see!!!!